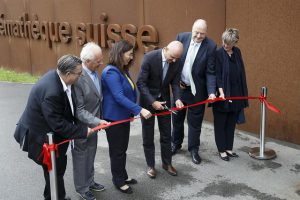 On September 6th, the Cinémathèque Suisse opened its new Research and Archive Center in the city of Penthaz in presence of Alain Berset, federal counselor, Isabelle Chassot, director of the Federal Office for culture, Cesla Amarelle, State counselor, and Pierre-Henri Dumont, mayor.

For Alain Berset, this Centre – with its 13000 m2 – hosts “one of the most important collections of treasures from film history of the entire world. But the real reason why it is so remarkable is because it represents the memory of Swiss cinema.” For him the inauguration of this Centre is “an important step in the process of modernizing and archiving our film heritage”.

In addition to areas dedicated to the preservation of film collections, the Centre has a laboratory for the digitization of its film heritage, areas dedicated to the restoration and cataloguing of documents, a museum area and many other spaces – all related to the institution’s digital archives. The Centre hosts more than 85000 film, 700000 reels and over 2 million photographies.

To discover more about the new Centre, click here.