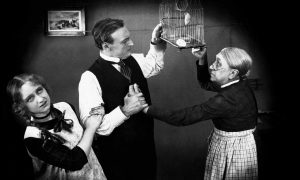 Silent movies are usually absent in the streaming realm. Archives or YouTube can be the first stop for such works, but usually this comes with much search or a comprises. In this panorama, the Danish Film Institute’s initiative is particularly significant. Stumfilm.dk has been created as part of an ongoing restoration project and its objective is to highlight the importance of Denmark’s film industry in the beginning of the 20th century, an age when stars like Asta Nielsen, Valdemar Psilander and Gunnar Tolnæs found fame. The platform launched with 40 films, but more than 400 made between 1897 and 1928 will be added over the span of the four-year long project. In addition, a three-year research project between Denmark and Germany will help in mapping out the traffic of ideas and people between these two countries, who leaded the silent film era.

The simple interface (now available in English and Danish) simplifies the process of browsing the mixture of shorts and epic feature-length movies, most of them unknown even to the experts of the era. The platform has to offer some hidden gems, even from its country’s most celebrated auteur: Master of the House, a feminist comedy, and Once Upon a Time, a fairytale romance. The films will be contextualized in thematic collection in order to highlight even the most hidden stories in the archive.

Other surprises include August Blom’s Atlantis – a story of male grief and romantic renewal, Holger-Madsen’s A Trip to Mars – a sci-fi voyage – and AW Sandberg’s The Golden Clown, a melancholic melodrama set in Paris.

Stumfilm.dk is made possible by donations from the Augustinus Foundation, the Aage and Johanne Louis-Hansen Foundation and the A.P. Møller Foundation.